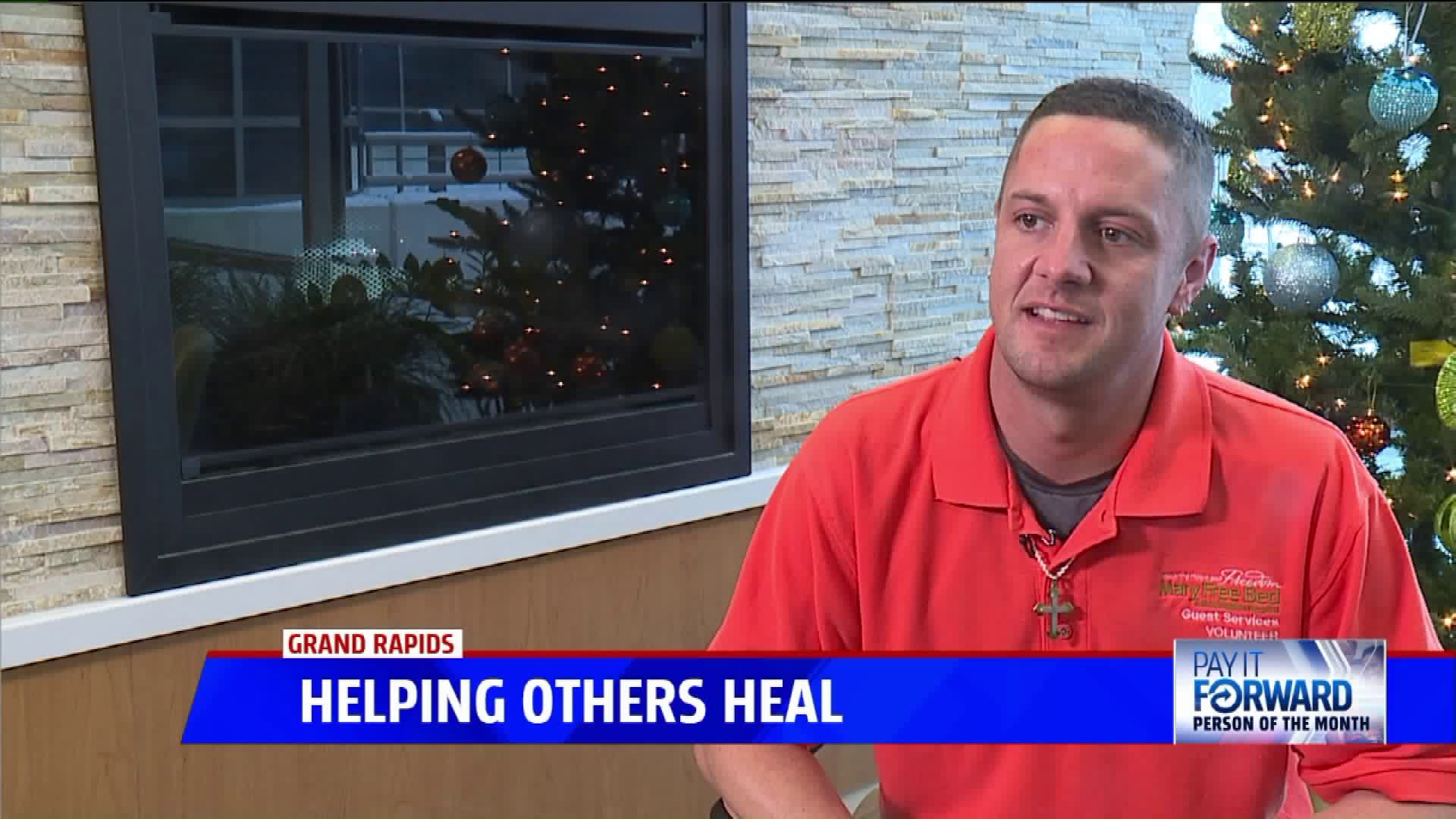 A former patient at Mary Free Bed is now a volunteer, inspiring staff and other patients.

GRAND RAPIDS, Mich.,-- Months after walking the same halls as a patient, Brandon Otto is now back at Mary Free Bed Rehabilitation Hospital, inspiring other as a dedicated volunteer.

Otto credits the facility with "rehabbing" his life in more ways than one.

"Something like this has really woken me up... I am a totally different person, and thank God for that," he told FOX 17 News.

Otto has little memory of exactly how his journey began. He said he simply woke up in the hospital one day in October 2016.

"[Doctors] said I sustained a traumatic brain injury and just lots of guesses as far as what happened...just somehow had a four inch crack in the back of my head and a bunch of brain bleeds in the front and no memory of how it happened," Otto explained. "Nobody found me laying on the ground or anything they just- my wife at the time said I couldn’t speak or lift my head up out of bed one night, called 911."

Otto would spend weeks at Mercy Health, before being transferred to Mary Free Bed-- where he was anything but a model patient.

"Not agreeing to do anything, just combative told everyone terrible things," he recalled. "Just with brain injuries and same with strokes and anything like that, it can affect your head and you don’t know who, or what you’re going to be when you come out of it. Or, how much you’re going to get back. It changes a lot of people, for good. I’m lucky it ended up that way for me."

Otto would suffer another setback, before finding his faith and finding his way back to Mary Free Bed. The longtime electrician fell from ladder, badly injuring his arm, just as he was getting back on his feet. Otto said he also divorced his wife and lost custody of his children.

That's when he said he finally hit rock bottom.

"That’s the point that changed everything for me, was not being able to work. Again. And find something to do," he said.

Somehow, something pointed Otto back to the rehabilitation hospital- ironically, a place that he couldn't wait to leave as a patient.

"It`s just pretty crazy, that place I said I would never go to again, now they can`t get me out of here," Otto said. "The first time was rehabbing me and getting me back, but this time it’s like breathing, I gotta have it."

Otto now regularly spends more than 30 hours each week as a volunteer at Mary Free Bed.

"He has been amazing since the day he got here," said Jenn Lannon, the Guest Service Coordinator at Mary Free Bed. "He did use to probably work 3 days a week, 3 hours during those shifts and now it’s all the time. You can usually see him smiling in the hallways, helping someone each and every day...I didn’t know him before the injury, but I do know the person I know now is pretty amazing."

Otto thrives on being able to share his story, offering words of advice and inspiring other patients.

"It’s like oxygen to me, I have to have this goodness in my life to keep me positive," he said. "They don’t understand how important it is, just letting me be me here, and how they’ve saved my life this time at Mary Free Bed."

A friend has recently started a GoFundMe Page to help Otto, who's still on the road to recovery. If you'd like to help, click here.

As or Pay It Forward Person of the Month, Otto is receiving a $300 dollar prize.

Meet Marie DeVries, our November Pay it Forward Person of the Month.