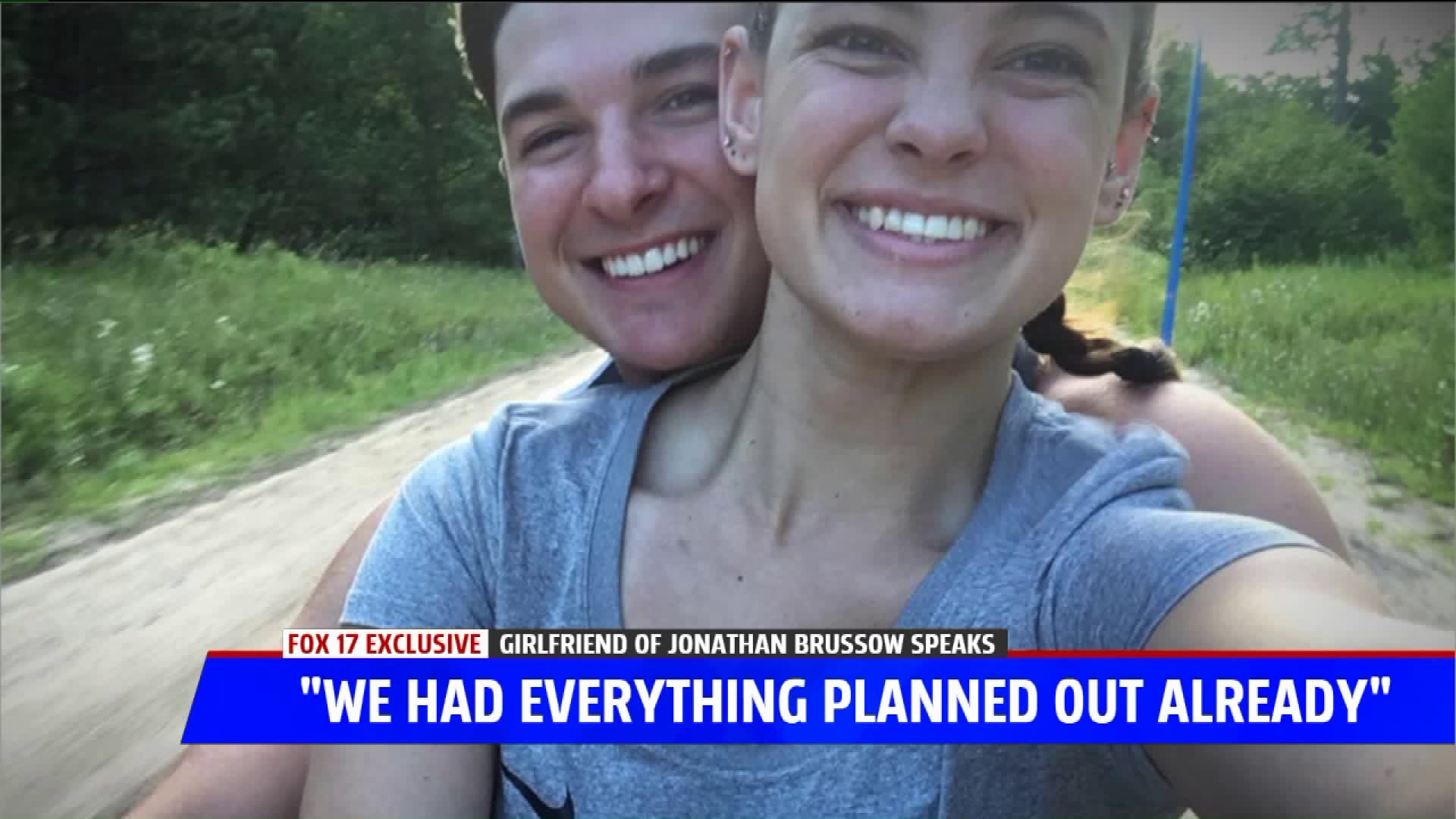 HARBOUR ISLAND, Bahamas-- After a young Rockford man's body was found in the Bahamas, his girlfriend is encouraging the community to celebrate his life and sharing his last words with FOX 17.

Athena Williams, 20, met Jonathan Brussow, 19, at a bonfire during the summer after the two finished eighth grade. When ninth grade started, they rode the same school bus. Williams says one morning, Brussow sat in the seat next to her and from there, it was young love.

Brussow had been with Williams and her family on vacation to the Bahamas. Williams says the night before Brussow went missing, he sat down with her family after she went to bed to ask them a question that would change their lives.

He wanted their permission to marry her.

“When we started dating he always told me, he said, ‘Since the first time I saw you, I knew I was gonna marry you,'" Williams tells FOX 17. “We had everything planned out already. He had our whole wedding planned out, too and we weren’t even engaged or anything.”

Before the sun rose that next morning, Brussow went with Williams' brother, Erik on a hike up a tall cliff nearby.

“When they were there, Jonathan also asked Erik if it was okay if he could marry me," Williams says. "I know that and the one thing Erik did tell me that Jonathan said was, ‘Come have a seat with me, buddy,' and then it just kind of happened, I guess.”

A huge wave swept the two young men into the water. Erik was able to grab onto a rock and get himself to shore. He had broken ribs and was cut badly but still, he ran a mile to get help for Jonathan before being taken to the hospital.

At 11 a.m., Williams got a message that Brussow wasn't with Erik.

“That’s pretty much when we knew that Jonathan was gone but we did not give up hope," Williams says. "We called every number possible. We called the embassy, the Nassau Coast Guard, the U.S. Coast Guard, the local police enforcement. We did not stop making calls.”

Brussow's parents immediately flew to the island. Williams tells FOX 17 that with help from locals, they searched for Brussow for days. She credits the Bahamians for their ability to continue the search.

There was a tropical storm that hit the island, making their search difficult. Still, she persisted.

“It’s Jonathan. Jonathan Brussow. If there’s anybody who could get out of a situation like this, it’s Jonathan," Williams says. “But the odds were absolutely against him. There was just no way he could have made it.”

Days later, Brussow's body was found. Though her boyfriend is gone, Williams says his memory will live on.

“He absolutely loved his life. He had no regrets. He had no complaints," Williams says. “I’ve never, ever experienced or seen anybody love somebody so genuinely like he actually loved me. It just blows me away, the person he was. The person he still is.”

She says her family is now focusing on returning the help that was given to them by local Bahamians. The Williams and Brussow families are raising money to install a safety device on the Glass Window Bridge, near where Brussow entered the water. Williams says this effort is especially important to Erik.

Williams says they also hope to help the local hospital get new equipment, like a much needed mammogram machine.