KPS graduate ‘crushed’ after she was denied Kalamazoo Promise 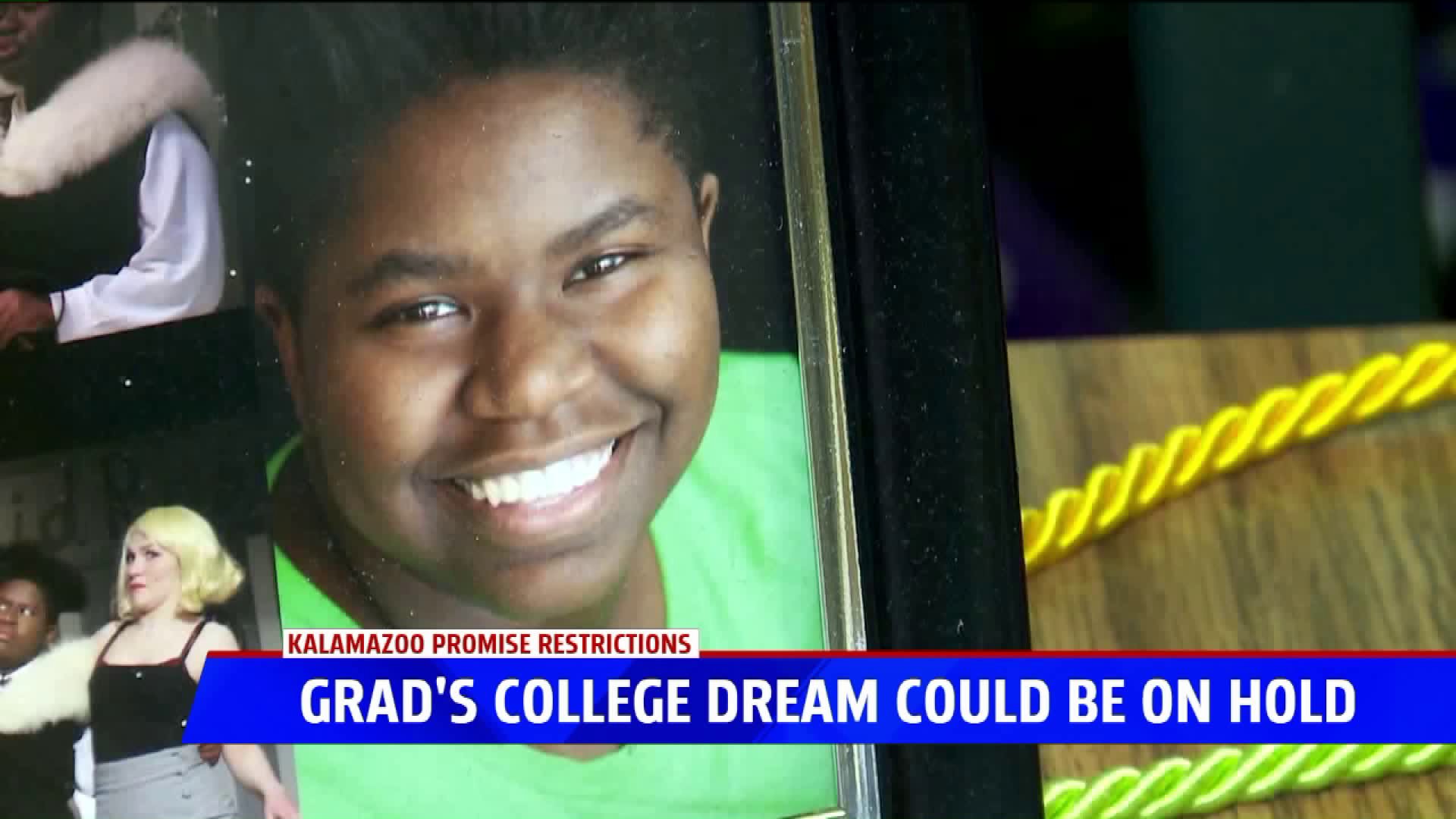 KALAMAZOO, Mich. — Zaviona Woodruff visited Oakland University in Rochester Hills last week and “fell in love,” she said. She first wanted to study criminal justice but then switched to mechanical engineering. She took an aviation tech class while at Loy Norrix High School and learned the different parts of an airplane. Now her dream is to fix them.

“I’ve worked so hard,” Zaviona, 18, said during an interview at her home. “I graduated with high honors. I spoke at graduation. I tried to do as much as I could to make myself look like a great student.”

She earned a 3.57 GPA and was an all-star on the bowling team. However, one week before graduation she learned that her dreams of going to college were in jeopardy.

“My whole life, I’m like, okay, I get the Promise, I’m good,” Zaviona said. “[To] just have that chair ripped from under me, like last second, [in] May, last second, it’s just really really hard.”

Zaviona cried. She said she didn’t receive the Kalamazoo Promise,  a scholarship guaranteed to any city student who remains in the Kalamazoo Public School system from kindergarten through 12th grade, because she didn’t live in the KPS district. Prior to 2016, she did. However that year she and her family became homeless.

“We were in a shelter for a good three, maybe six months,” she said. “We were all in the same room: three girls and a dad.’”

Her father Cecil moved them to an apartment at a housing complex on Gull Road. He said, before moving in, he asked management if the place was in Kalamazoo. They replied,  "yes" and that a KPS bus would pick the girls up everyday for school. However he later learned from Comstock Schools that KPS provided the service because they were displaced. They told him he actually lived in Comstock Township, across the street from the KPS district line.

“I had to fill out forms to request that they be allowed to go to the Kalamazoo Schools,” he said. “With that, I had to transport them myself. For the last year and half, I drove them back and forth every day for the Kalamazoo Promise.”

Zaviona continued to excel at Loy Norrix, starring in Little Shop of Horrors and joining the swim team. When she was told she wouldn’t receive the Promise, she immediately appealed.

“My dad is a single parent,” she remembered explaining to them in a letter to the appeals committee. “He doesn’t have a steady job all the time. And he’s trying to do things to make ends meet to even just keep a house, a roof over our head, food on the table.”

Her teachers backed her, she said. The current librarian wrote a letter to the committee and got some of her former teachers, from elementary school and middle school, to sign it. Zaviona never read the letter, but was grateful they wrote one.

"'You’ve made the promise for students like her,'" she remembered them saying. "There’s going to be those students that play out in the hallway, graduate with a 2.5 [GPA], and don’t even go to college, but they qualify for that lump sum of money for the next 10 years."

Kalamazoo Promise Executive Director Bob Jorth said the committee looks at each appeal case by case. The committee is made up of community members who look at the whole situation presented to them, and then they make a decision. In May, Zaviona was denied the scholarship.

“They work really really hard to find a way to give the awards,” Jorth said during a phone interview. “We also try to help students who aren’t successful with the appeal understand there are other options for financing their education, you know, help them identify other scholarship opportunities.”

Zaviona said she’s since taken on two jobs with the intention that she’ll be heading to OU in a few weeks. However she still crushed and still hopes for the best.

UPDATE: Thursday, Oakland University and the community stepped up to help Woodruff. Read that here.