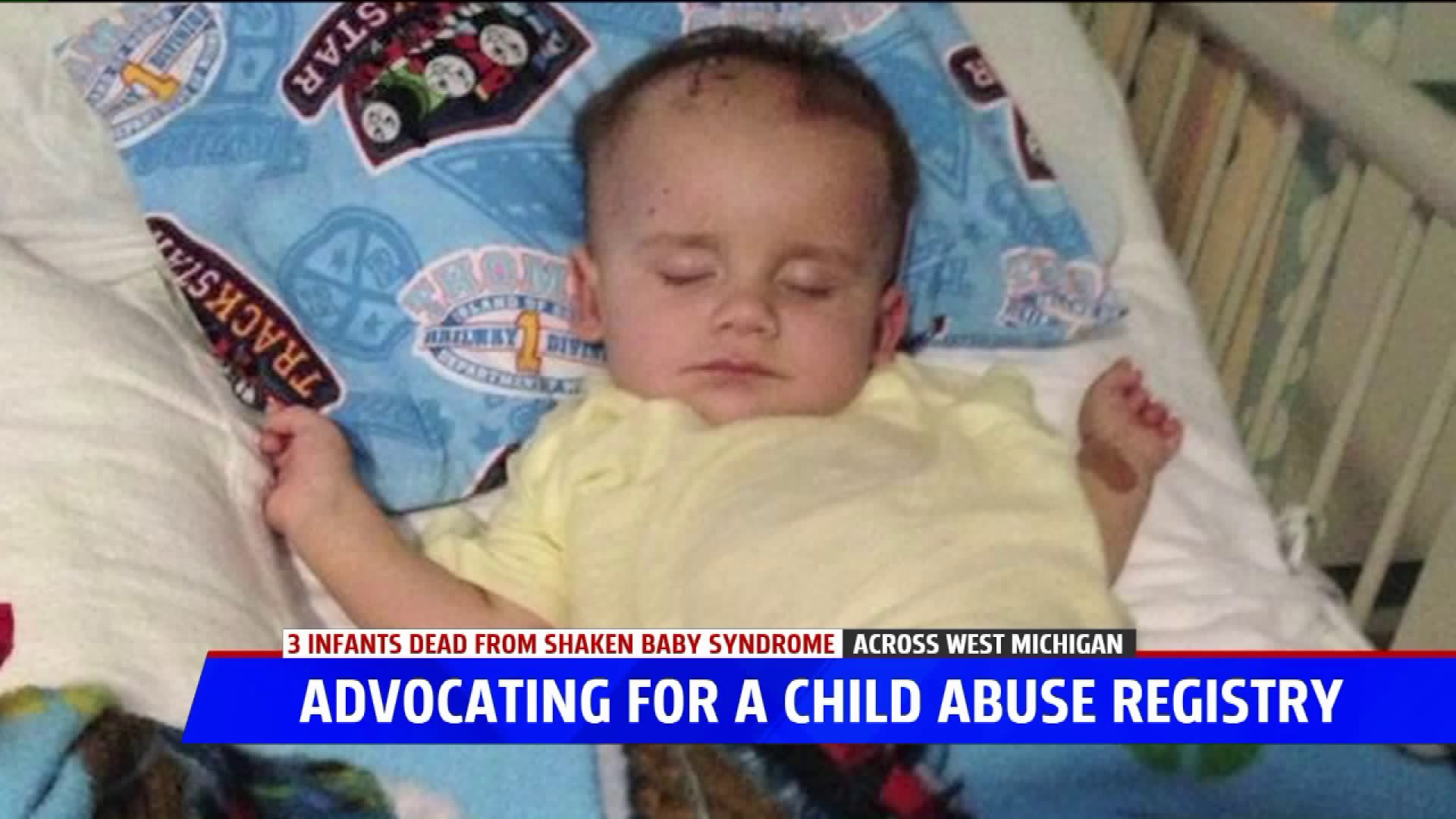 WEST MICHIGAN, Mich.-- Over the past couple weeks three babies in West Michigan have died after officials say they were shaken. One mom is working to change that after her baby almost died five years ago.

Viewers may remember Erica Hammel whose son, Wyatt nearly died from Shaken Baby Syndrome in 2013, leaving him with permanent brain damage. Since then, she’s advocated for laws that would create a child abuse registry, which she says could’ve saved a lot of lives over the past several years.

It’s been more than a year since Wyatt’s Law was introduced in the Senate and its creator says it’s necessary now more than ever.

"We have to do something," said Hammel. "Child abuse is up 30 percent in this state and it’s just increasing every year.”

Erica Hammel’s son, Wyatt was just a year old when his father’s girlfriend abused him leaving him with a brain injury that’ll affect the rest of his life.

“My son was shaken, she literally almost killed him and his case came into the prosecutor’s office as a homicide, but he did survive and after everything happened I found out she had been arrested twice before of child abuse," said Hammel.

That woman was Rachel Edwards who had been convicted of 3rd degree child abuse twice, but was given probation and forced to pay fines. Erica says because of that, she didn’t show up when she ran a background check on her. It’s how Erica came up with the idea for a child abuse registry and Wyatt’s Law was born.

Erica wants the database to be public so she would’ve been able to see those past convictions. With three babies dead in Kent, Kalamazoo and Ottawa counties in the last two weeks, Erica says it might’ve saved their lives, as well.

"Children don’t have a voice," said Hammel. "Especially those like, my son was 1 and if they’re being beaten and a lot of times abuse is less severe before it becomes extremely severe, they can’t speak up. I feel [we] have a right as parents, as caregivers, as anybody to know what these people, what their crimes were so we can keep our children away from them. Knowledge is power, that’s what I always say.”

Rachel Edwards was sentenced in Wyatt’s case in 2015.

As for those recent cases here in West Michigan, all three suspects are facing murder and child abuse charges.

Wyatt’s Law is currently on the Senate floor, but it hasn’t made it to the House yet. There’s no timeline for when things might move forward, but Erica says she’s not going to stop until working until it passes.