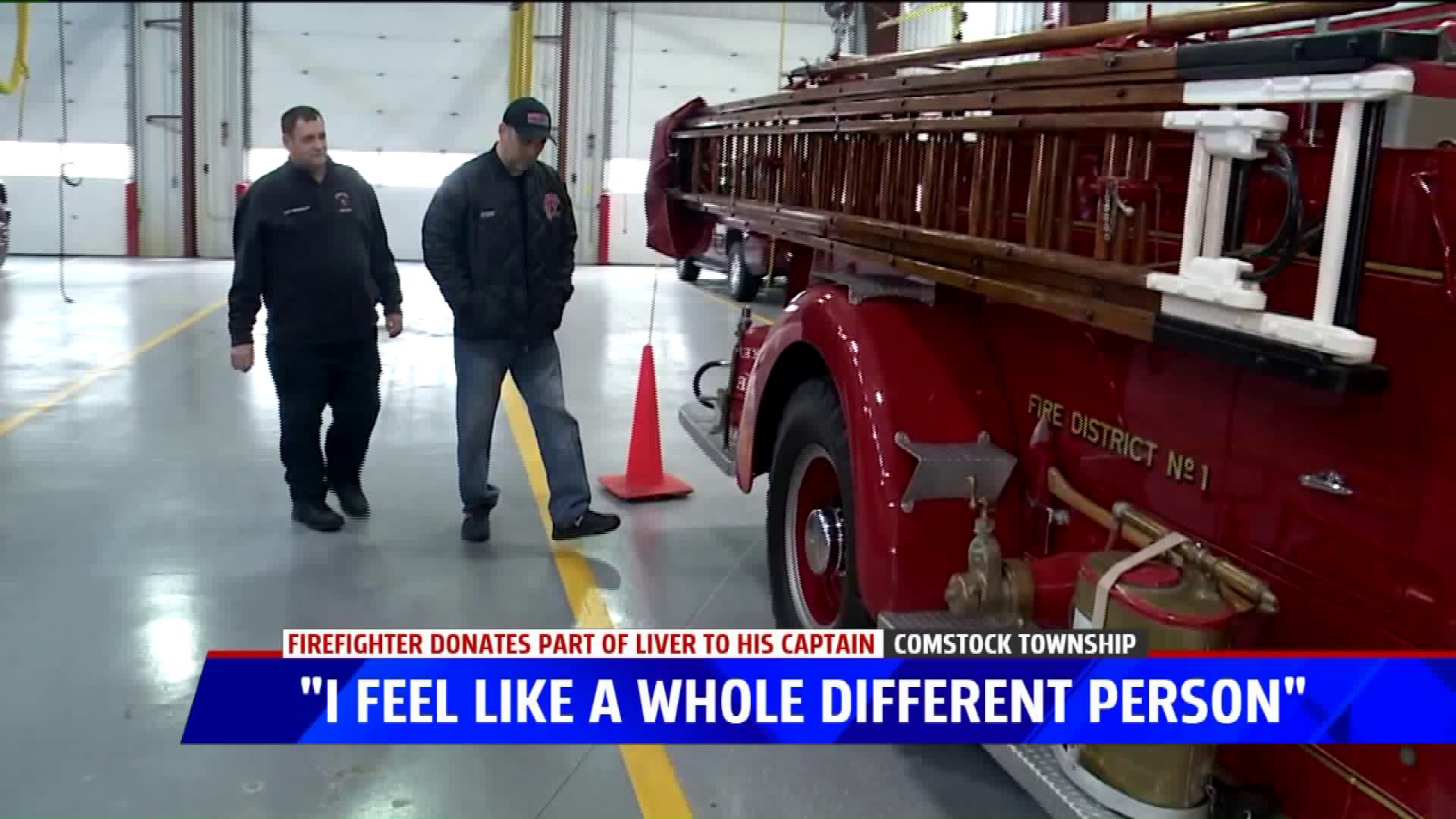 COMSTOCK TOWNSHIP, Mich. — Fire Capt. Dale Beauchamp said he and his wife were at a loss for words when the doctors told him a few months ago that he needed a new liver. He'd been battling liver disease for over two years and his liver was only getting worse.

However on Feb. 6, his luck changed.

“I didn’t realize how sick I was before I went in and had the operation,” Beauchamp said during an interview at the Comstock Township Fire and Rescue station. “Now it’s like I feel like a whole different person. I feel a lot better.”

That day, fellow firefighter Lt. Doug McLiechey donated part of his liver to Beauchamp. They underwent a day-long surgery at the University of Michigan in Ann Arbor. Doug went in first at 6:30 a.m.

“The way it works, they go in with the donor and they get you cut open and make sure everything is good like it was in their initial assessments,” said McLiechey, who went through several tests before the big surgery. “Once that’s good, then they bring the recipient in.”

Beauchamp was on the operating table by that afternoon, he said. Immediately afterwards he was in the intensive care unit for five days followed by several days of being hooked up to a breathing machine.

By that time, McLiechey had already returned home to the Kalamazoo area. He said he’s been recovering well, especially his liver which has already started to grow back. Doctors told him it’ll be at least six weeks before it returns to 100 percent.

“I haven’t had any issues that I’ve known of yet. I’m not in much pain. All my bloodwork’s coming back almost normal,” said McLiechey, who’s appetite has returned  back to normal as well.  “My energy level is still like Dale’s. You get tired really easy. I mean, 4, 5 ,6 o’clock it’s time to hunker down and lay on the couch.”

However, he wasn’t given as many post-surgery restrictions as Beauchamp, he said. Doctors ordered him not to pick up anything.

He’s allowed to eat what he wants, as long as it agrees with him, and was encouraged to move around. But exercise had to be minimal. So far, he said he's abiding by the rules.

“I had lost over 40 pounds of water weight from water retention,” Beauchamp said. “I’m making his liver work overtime.”

Tuesday, Beauchamp said he felt great. He was up and moving around at the station for a bit, and McLiechey was glad to see it.

“He’s old enough to be my dad so. So I guess he’s like a father figure to me,” he said. “Firefighters are firefighters. We stick together.”

McLiechey said he’s expected to return to work in May. Beauchamp will be back in August. However, if he had it his way, he’d return to tomorrow.