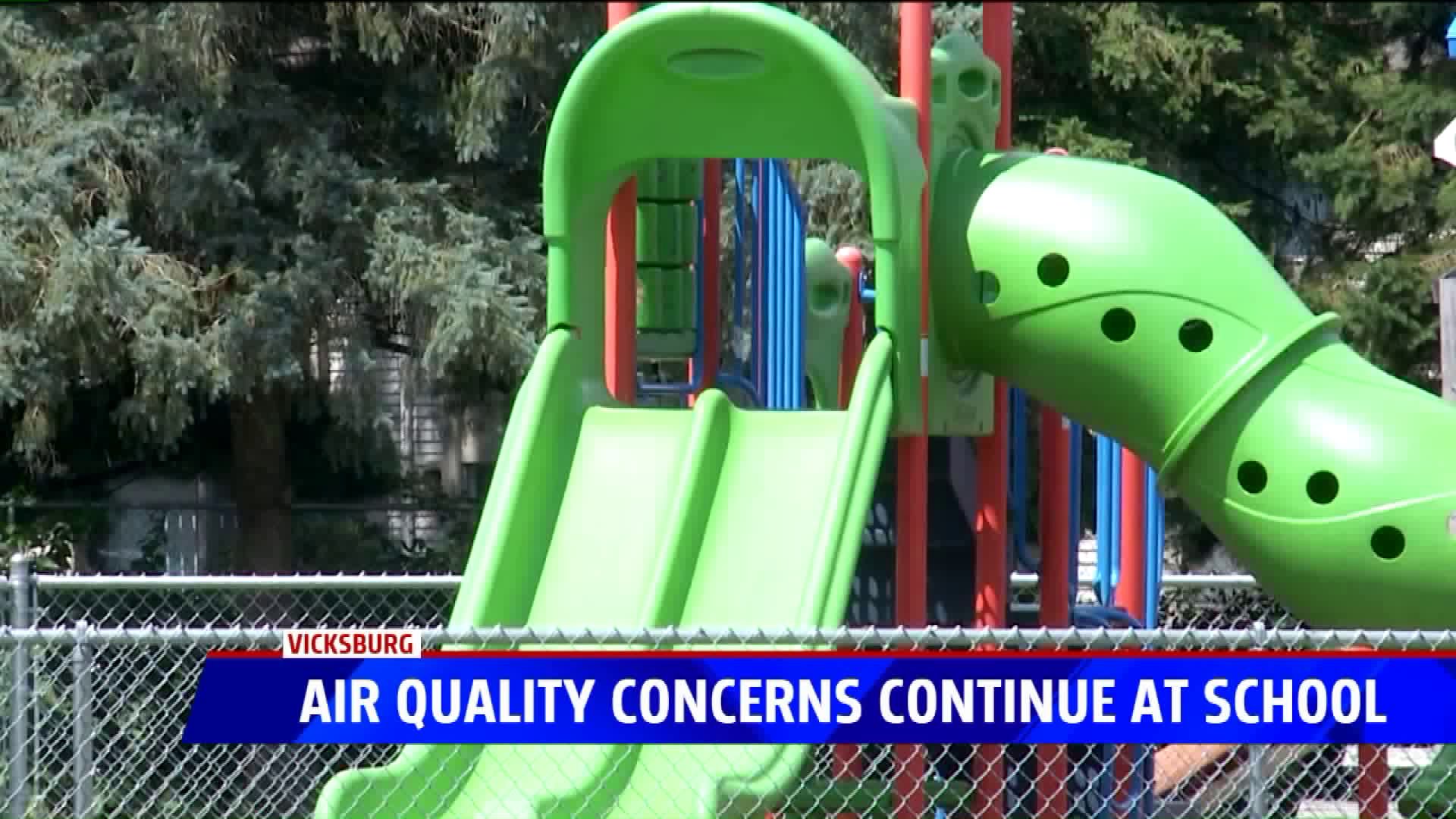 VICKSBURG, Mich. — Thirty teachers at Sunset Lake Elementary School released a statement this week saying that they cannot in “good conscience” return to school when it opens in early September. They said it’s because of the poor air quality in the building and that it’s led to various health problems, including migraines and “daily nosebleeds.”

Two parents who got a hold of the press release, Stephanie Willoughby and Steven Nevenhoven, say they were shocked. Their children had been experiencing the same illnesses.

“It was just: Wait a minute, this isn’t just kids, our teachers are going through this,” said Willoughby, whose daughter Erin attends Sunset.  “We need to be supportive of our teachers.”

The teachers sought the help of a lawyer at Burchfield & Pollesch P.C. in Brighton, who later sent the statement to the school district and media outlets. The release revealed that of the 30 teachers, nine have had miscarriages, 10 have had hysterectomies, and 20 have had either infertility and reproductive problems.

Two teachers had strokes, one in December where the teacher was hospitalized and missed several weeks of school.

“Parents and teachers just kind of got that nervous chill,” said Nevenhoven, who also has children at Sunset. “It just kind of spun downward from there.”

The district hired the environmental group NOVA to check the air quality. They stated there are no significant health hazards in the room where the teacher taught.

“It’s very disgusting,” Willoughby said. “You get in that room and you get in the back of the building, you just can’t breathe. It just feels awful.”

Since then parents have been banding together, they said. Willoughby and Nevenhoven are a part of a group of parents who have been paying close attention to what’s been happening at the school and, in some cases, comparing notes.

“When one of the neighbors in our community put a Facebook post that said, Hey, any of you have kids that attend Sunset Lake have health issues like headaches and colds and things, we had 168 comments on the Facebook page,” Willoughby said. "Many of them saying, Yeah, my kids are in middle school now, and they don’t get that anymore, but they did when they attended Sunset Lake.”

Willoughby said her family has been talking about the illnesses for two years after her daughter Erin started getting sick in the third grade.

“We were told: Oh, you know, it’s got to be her, there’s nothing wrong with the classroom,” Willoughby recalled. “Then she was in fourth grade, and we’re getting calls to ‘come get me, ‘cause I’ve got a headache.’”

Willoughby said she then received two letters from the principal saying that Erin missed too many days of school, even after she brought up the health concerns to officials.

“We’ve got a neighbor ... who’s pulling her daughter out of Sunset Lake,” Willoughby said. “Her nose bleeds were so bad she had to get her nose cauterized.”

Willoughby said parents believe the problem has to do with the mold and ventilation in the building, which is what the teachers expressed in the statement.

“You literally can pop the ceiling tile and just pull it out,” Willoughby said. “I saw that as a parent walking around the school. You just look up and you’re like, ew, this isn’t good.”

Nevenhoven agreed. He has voiced his concerns to the school board and called the Environmental Protection Agency and the county about the building’s conditions and parents' health concerns.

“The representative that was down here from Kalamazoo County was in the school for only two hours, and he stated that, 'No wonder children and faculty are having so many issues with the migraines and the headaches,’” Nevenhoven remembered. “It was just horrible.”

“Vicksburg Community Schools has continued to address environmental concerns at Sunset Lake Elementary School, putting the health and welfare of district educators and staff first (…) We are removing the carpet in classrooms throughout the building and replacing classroom floors with tile. The health and safety of our staff and students will always come first.”

Nevenhoven said that’s not enough. “They’re not taking care of the root causes, which is the boiler and the windows, which is causing all the headaches and migraines, respiratory problems,” he said.

The district’s statement goes on to say that NIOSH — the National Institute for Occupational Safety and Health — will get involved in the coming months.

He said parents are fearful of sending their children back to Sunset Lake. If nothing changes, he and his family may move.

“Me and my wife have debated to transfer schools to Schoolcraft. We’ve actually looked at houses,” Nevenhoven said. “It’s kind of nerve-wracking. We’ve been in the district for about 12 years, and every year has been great. But this last past year has just been horrible.”