Michigan comes back to nip Army 24-21 in 2 overtimes 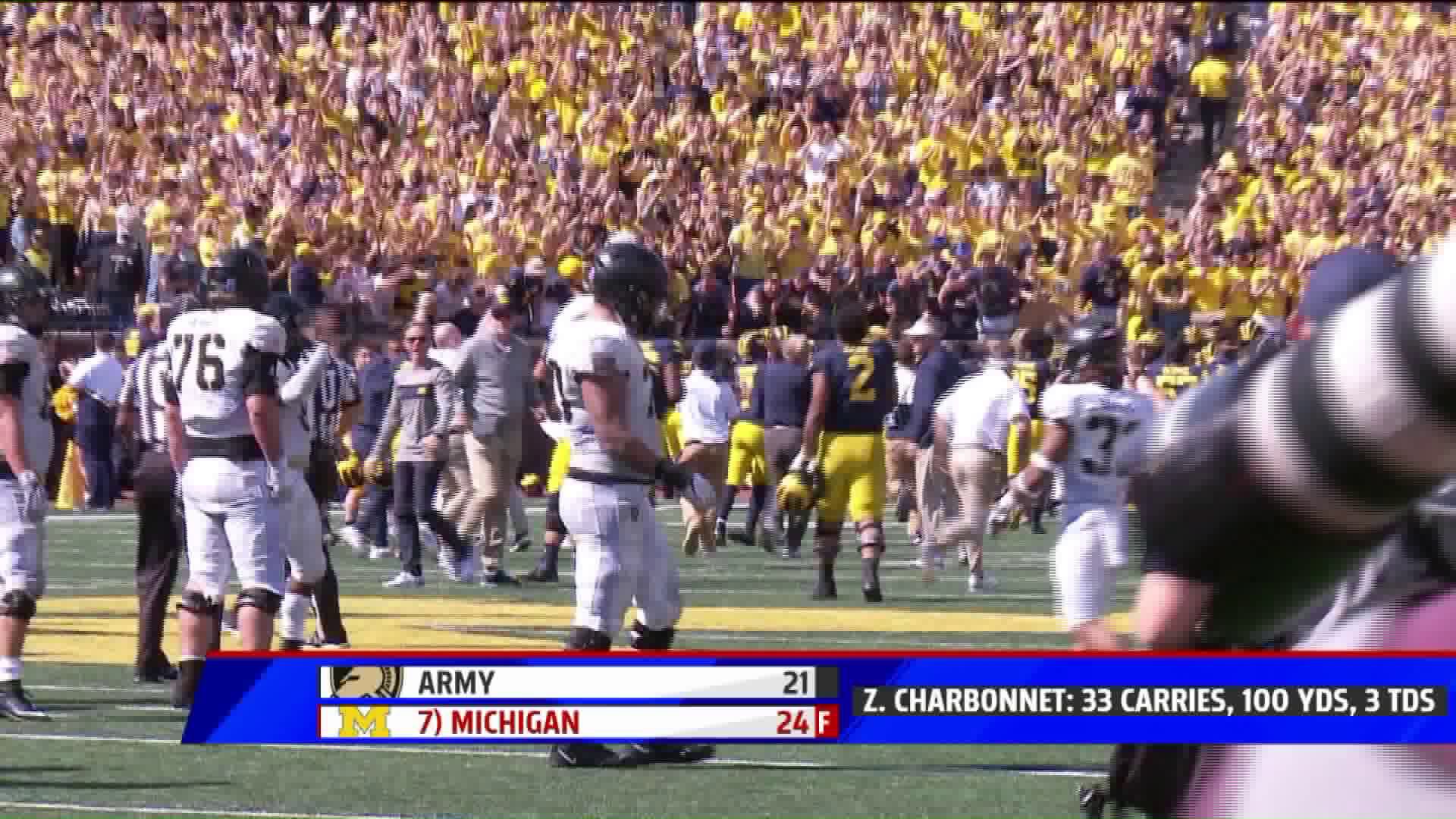 ANN ARBOR, Mich. -- The Michigan Wolverines rallied to defeat Army 24-21 in two overtimes to capture a battle of undefeated squads in the Military Appreciation Game at Michigan Stadium on Saturday afternoon.

The contest was shown live on FOX 17.

Michigan is currently rated No. 7 nationally. The Wolverines entered the contest as 23-point favorites.

Army came in leading the all-time series between the two schools 5-4, although Michigan had won the last four. The two most recently met in 1962, when the Wolverines upset the Cadets.

This time around, Michigan senior wide receiver Donovan Peoples-Jones was in street clothes on the sidelines and missed his second straight game with a foot injury.

After Wolverine quarterback Shea Patterson fumbled the ball away, the Black Knights jumped out to a 7-0 lead on Sandon McCoy’s 1-yard run with 5:01 to go in the opener. Michigan retaliated with a successful fake punt and eventually knotted the score on a 1-yard run by freshman Zach Charbonnet with 24 seconds remaining in the initial period.

The two teams traded possessions until the Wolverines lost their third fumble and Kelvin Hopkins Jr. scored on a quarterback sneak from 1 yard away for a 14-7 West Point lead with 2:51 left in the half. That score stood at intermission.

The second half began in back-and-forth fashion until, after an interception, Michigan drove the length of the field and deadlocked the proceedings at 14-all on another 1-yard run by Charbonnet at the 2:24 juncture of the third. That count stood through the end of the quarter.

The two once again traded possessions in regulation, until West Point freshman Cole Talley missed a 50-yard field goal as time elapsed to send the action into overtime.

During the first extra session, Army had the initial possession and Hopkins gave the Cadets a 21-14 edge on a 2-yard quarterback keeper around left end. The Wolverines then countered with a 3-yard scoring run by Charbonnet for a 21-21 tie.

Michigan opened the second OT with a 43-yard field goal from Jake Moody for a 24-21 bulge. On the Cadets’ possession, Hopkins fumbled the ball away on third down and the victory belonged to the Wolverines.

Michigan improved to 2-0 entering a week off prior to its Big Ten Conference opener at 17th-ranked Wisconsin. Kickoff is scheduled for noon on Saturday, Sept. 21, at Camp Randall Stadium in Madison, Wis.

Meanwhile, Army evened up at 1-1 on the campaign. The Black Knights will travel to meet Texas San Antonio next Saturday afternoon.