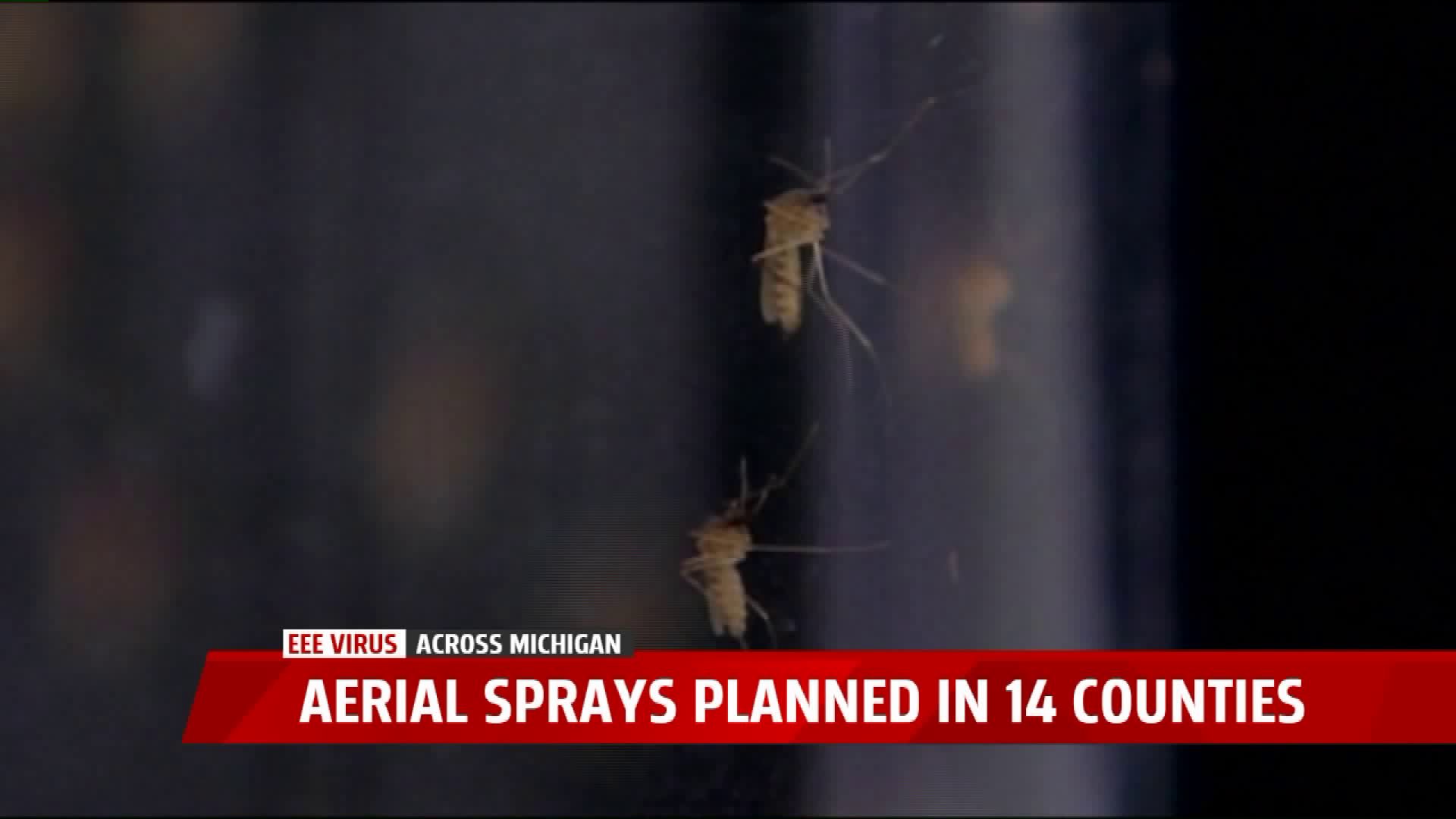 UPDATE: On Sunday afternoon, the state of Michigan announced the following:

If the weather allows, spraying will be conducted in parts of Van Buren County.

All other treatment zones, including those covering Kalamazoo and Portage, will not be sprayed Sunday evening due to the rainy weather.

LANSING, Mich. -- Due to the growing concerns surrounding Eastern equine encephalitis (EEE) in Michigan, the Department of Health and Human Services and 12 local health departments will be doing aerial spraying to prevent further spread of the mosquito-borne disease.

"When conducted according to strict regulations, aerial spraying is safe for people, animals, and the environment," said Jim Rutherford, health officer with the Kalamazoo County Health and Community Services Department, during a press conference. "Aerial spraying has been successfully used in the United States for decades to reduce mosquito populations."

"Mosquito-controlled professionals will apply approved insecticides as ultra-low-volume (ULV) spray," Rutherford said. "They will be using twin-engine planes traveling at 175 miles per hour, 300-feet above the canopy. The ULV sprayers dispense very fine aerosols droplets. The droplets are smaller than the head of a pin. They drift through the air to kill the adult mosquitos on contact."

Officials said they recommend people who have known sensitivities to pyrethrins stay indoors to reduce potential exposure to the spray.

"There are further ways to reduce that risk and to provide that additional layer of reassurance," said Dr. William Nettleton, medical officer for both the Kalamazoo County Health Department and Calhoun County Health Department, "and that includes being inside, closing your window, turning off your air conditioning. These, and also considering bringing your pets indoors and covering your swimming pool."

The announcement comes as multiple schools have moved up the times of their sporting events and even canceled their homecoming activities in an effort to limit mosquito exposure during dusk hours.

On September 27, officials released a specific county-by-county map of where the aerial treatment zones will be.

Officials said there have been nine human cases of EEE in six different counties throughout the state. Three of them were fatal.  There have also been 27 animal cases.

People can reduce their risks by using bug spray with DEET, avoiding being outside at dusk, wearing long sleeve clothing, and getting rid of standing water on their property.