Driver accused of fleeing police did not have valid license, records show 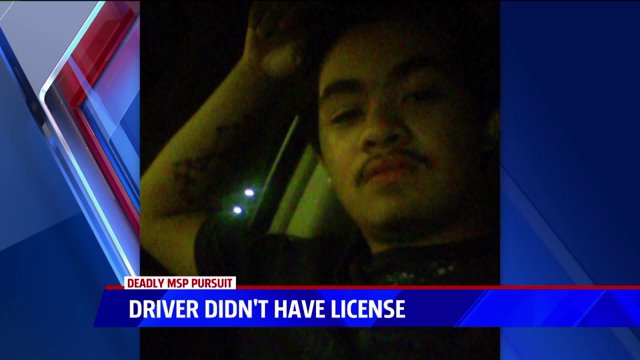 GRAND RAPIDS, Mich. — The driver accused of leading police on a chase that ended in a deadly crash does not have a valid driver's license, according to Secretary of State records.

Police have not yet identified the suspect, but relatives and friends confirm to FOX 17 Alejandro "Alex" Torrez was the driver in the car being chased by police Saturday night. He survived the crash but was seriously hurt.

Torrez was seen speeding on U.S. 131 Saturday night doing 90 in a 70 mph zone, according to Michigan State Police. The trooper attempted to pull the vehicle over and that's when police say the chase ensued.

The crash happened after 10:00 p.m. when the vehicle being chased by police drove through the intersection of Broadmoor Ave. SE and 52nd Street in Kentwood, crashing into another vehicle driving northbound. Tara Oskam, 21, a junior at Calvin College was killed in the collision.  The passenger of the fleeing vehicle, David Torrez, 15 was also killed.

"He will be remembered for his big smile and his sense of humor, there was never a dull moment with David he was truly an amazing young man who loved his mother deeply," David's obituary reads.

Friends and relatives say Alex and David were cousins.

Secretary of State records show Torrez, who turns 17 in less than two weeks, does not have a valid drivers license and had been stopped three times before while driving without a license. The three stops occurred in March, April and May of 2016.

Kent County court records also show Torrez has a juvenile criminal record. Previously, he was charged in 2015 for carrying concealed brass knuckles and a knife. He was also charged that year with stealing a car and jewelry.

He was ordered by the court not to have any contact with the Maniac Latin Disciples gang.

On Monday, Michigan State Police said the trooper who was pursuing a fleeing vehicle Saturday night before a deadly crash was following department protocol.

**Editor's note: An earlier version of this article inaccurately reported which months Torrez was stopped and found to not have a valid license.