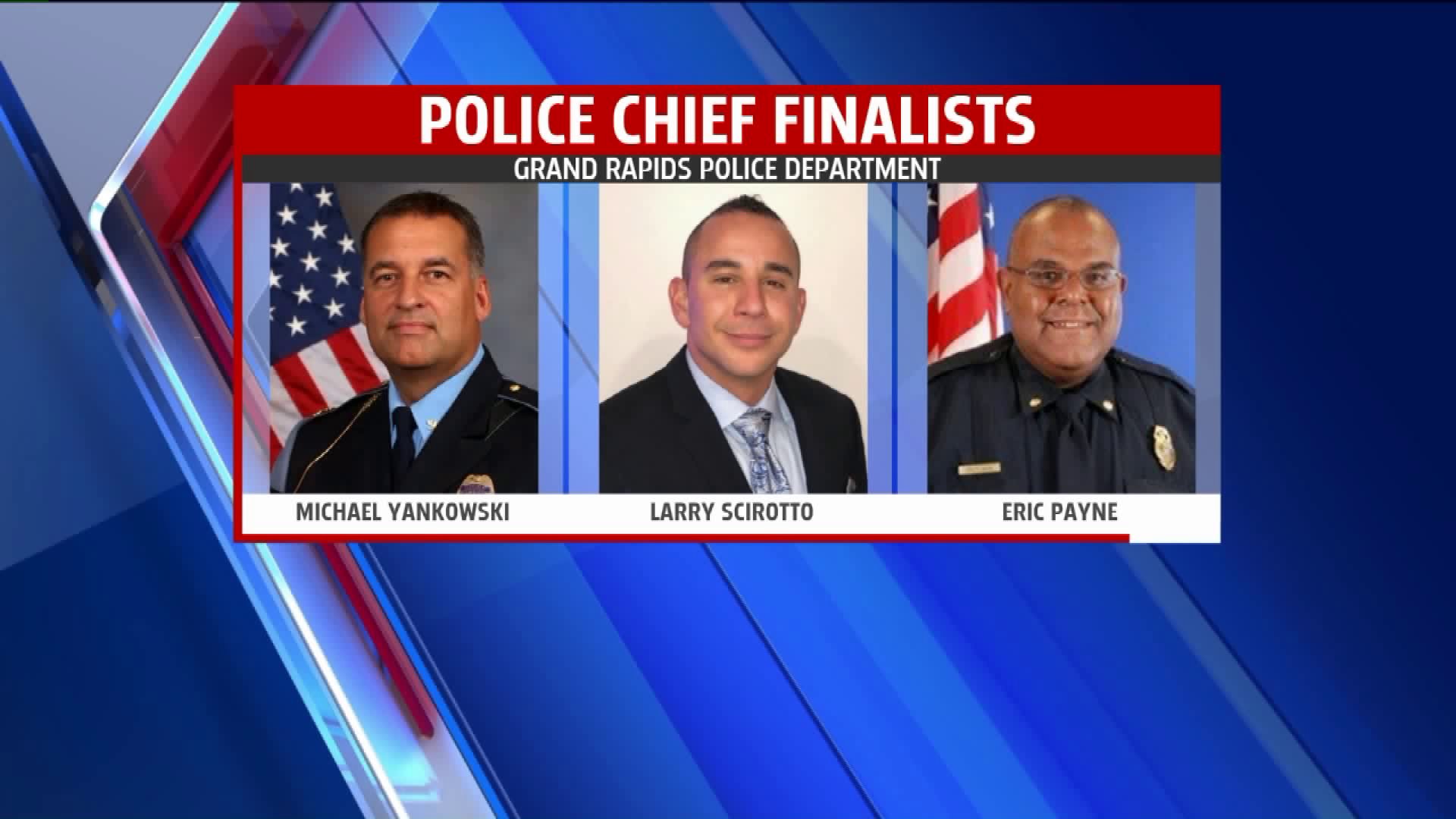 GRAND RAPIDS, Mich. — Three finalists to be Grand Rapids’ next police chief spoke with the community they are hoping to serve at a public forum Thursday night.

The event was all about getting to know the next person to fill the role that became vacant when former Chief David Rahinsky retired last December.

City Manager Mark Washington will hold a private interview with each candidate June 14. A final decision is expected to be made by the end of June.

Since Rahinsky’s retirement, the Grand Rapids Police Department has been led by Interim Chief David Kiddle. The city has been on a nationwide search since then and has narrowed the list of candidates down to three:

Candidates addressed issues like hiring policies, community policing and took a mix of questions from the comment section of a Facebook Live and from people in attendance.

A common theme Thursday night regardless of the topic being discussed was the role police play in the community.

During each candidates’ introduction, they focused on what they could do for the people they serve and to protect the safety of the city.

Scirotto says being engaged with the community requires a committed effort from both officers and the citizens they protect.

“Police administration needs to be intentional and that effort of community engagement committed to community police partnerships, not out of a matter of convenience or in moments of crisis but in a matter of intention and necessity,” he said. “My goal as the leader of this organization if given the opportunity is to make Grand Rapids Police Department the national gold standard for law enforcement and community police relations.”

Yankowski said the community’s relationship with police is what gives the department its credibility and authority.

Payne, who has worked and lived in Grand Rapids for the last 33 years, says he understands the pain the community has felt with law enforcement.

“I have been racially profiled, I understand that. I understand that pain. It’s not just black and brown, Bosnian, Asian,” Payne said. “We need to be better about bettering the relationship. Listen to the community in how to deal with enforcement.”

Each of the candidates said they understand the need to hire quality police officers that are also representative of the community they serve.

Grand Rapids police have been under scrutiny in recent years after incidents regarding handcuffing a child, studies determining minorities are targeted more often in traffic stops, and the detaining of a former Marine.

Payne said the department needs to tighten its standards when it comes to hiring decisions.

“We need to tighten our standards, (get) more diverse candidates,” he said. Right now, we have 11 recruits out of Grand Valley. Legally, I cannot force them to live in the city, but there are incentives.”

Scirotto also touched on the need for officers to live within the city.

“(Officers have an) obligation to live within the city, that we take ownership in the city. It’s purposeful and intentional with hiring. Upward mobility with the potential for minorities,” he said.

Yankowski said he wants to put a priority on recruiting and hiring practices.

“Recruiting and hiring is a top process. National crisis in law enforcement to even recruit a police officers to do the job,” he said. “If you work hard at it, you can accomplish that. Minority/female hiring has been at 70% hiring. Try to engage our youth at a young age.”

Outside of ensuring there is a diverse workforce, each of the police chief candidates said they need to hire the best candidate possible.

Payne wants officers to be able to connect with the people they are helping.

“We’re looking for the best candidate out there,” he said. “The officer who is able to listen with the core problems: being able to relate to someone, being able to communicate. That’s what I look for.”

Scirotto said police need to be committed to serving others.

“Men and woman that are committed to the service of others, which is exhibited prior to them before becoming a police officer,” he said. “They must have shown a commitment to others. Every person created with dignity and respect.”