‘This is a community problem’: GRPD investigating 7 shootings in 60 hours 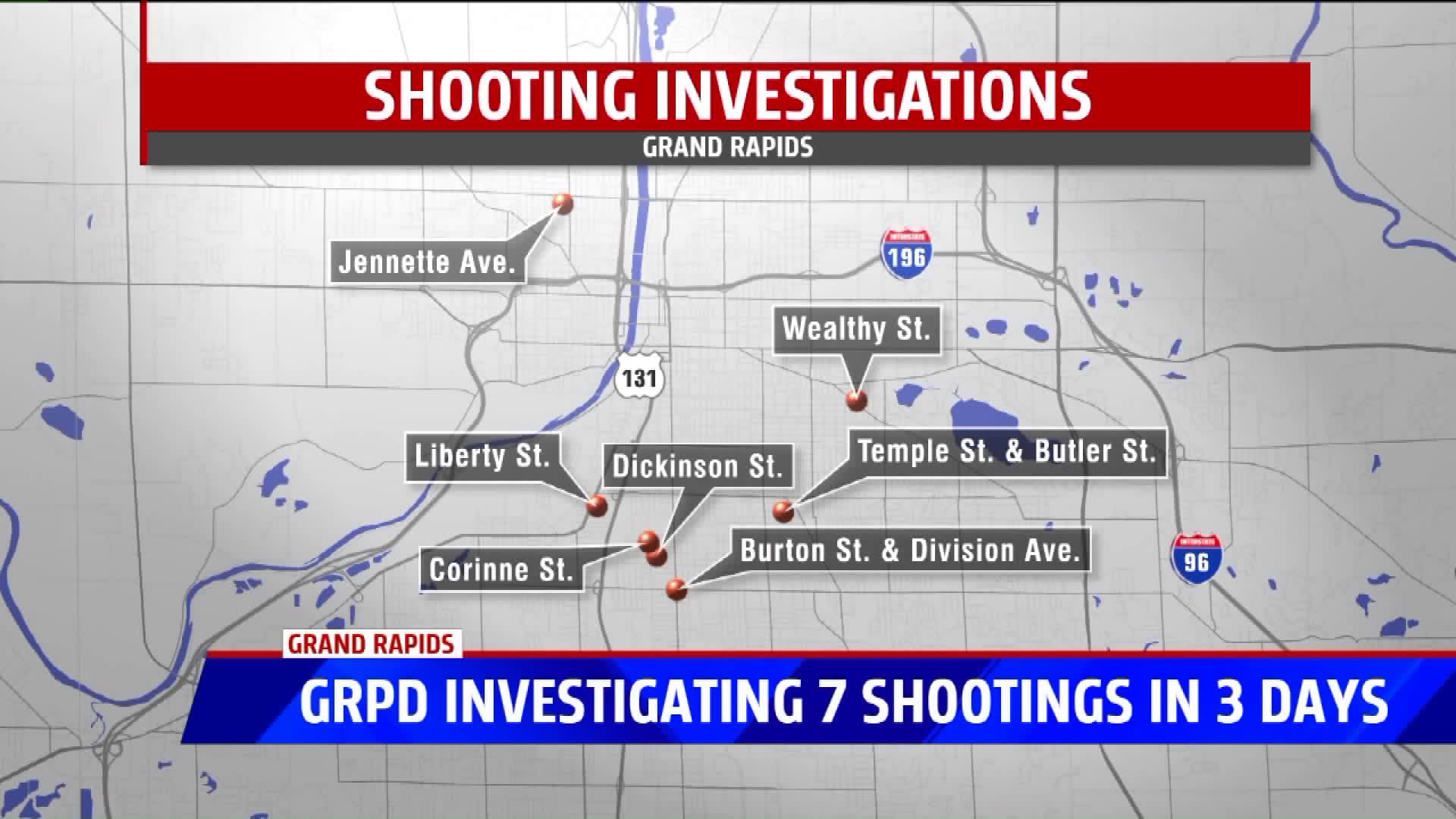 GRAND RAPIDS, Mich. — Police are asking the community to come together after a string of seven shootings in a 60-hour time span in Grand Rapids.

Adams asked community members to help police with their investigations.

"We've been monitoring our shootings over the last couple of months, we have been seeing a slow uptick in those numbers in the last few months, we find it completely unacceptable,” Kiddle said. “This past weekend obviously we've seen a larger increase in those numbers, what Sgt. Adams told you, this is not just a police problem, this is a community issue.”

Kiddle said the community needs to come together despite the issues the police department has been dealing with over the last several months.

“The police department has been held accountable, for several months now we've been under the gun for a variety of different issues, we need the community to come together and fight against this uptick in violent crime,” he said. “This is completely unacceptable as far as the gun activity, the GRPD will take swift action against anyone handling a gun, found with a gun, shooting a gun, whatever the case may be.

“We will pursue those individuals who conduct any sort of violent crime and we will do so with the upmost professionalism and we will ensure that the prosecutor does the same and puts some of these people away for as long as they can be put away for.”

The first happened around 10:30 p.m. on Liberty Street where a suspect shot up a house after a family argument. Nobody was injured and the suspect was arrested at the scene.

A few hours later, police were called to Wealthy Street on a report of a suspect walking into a crowd, firing two shots and running away. Police are still searching for that suspect.

Around 2:29 a.m. Sunday, a 10-year-old girl was hospitalized after being shot outside a home at the intersection of Temple and Butler streets.

Minutes later, officers were sent to Robins Lock Shop near the intersection of Burton Street and Division Avenue after a man shot another man in the leg during an argument.

Investigators said none of the weekend shootings are connected.

The pattern continued into the week starting with a trio of shootings Tuesday morning.

The first happened on Jennette Avenue when someone shot into a home. No arrests have been made and nobody was hurt in the incident.

A short time later, a woman was shot twice when someone opened fire while she was sitting in a car on Dickinson Street.

In another incident, a man was hospitalized around 9 a.m. Tuesday after he was shot at a home on Corinne Street, just a block away from the Dickinson Street incident. Investigators say they do not believe this incident is connected to any of the others.

Police are still searching for two male suspects who ran away from the scene.

Anyone with information on any of the shootings is asked to contact Grand Rapids police at 616-456-3400 or Silent Observer at 616-774-2345. Tips can also be reported anonymously online.