Kalamazoo County Health Dept. calls off aerial spraying of insecticides for the county 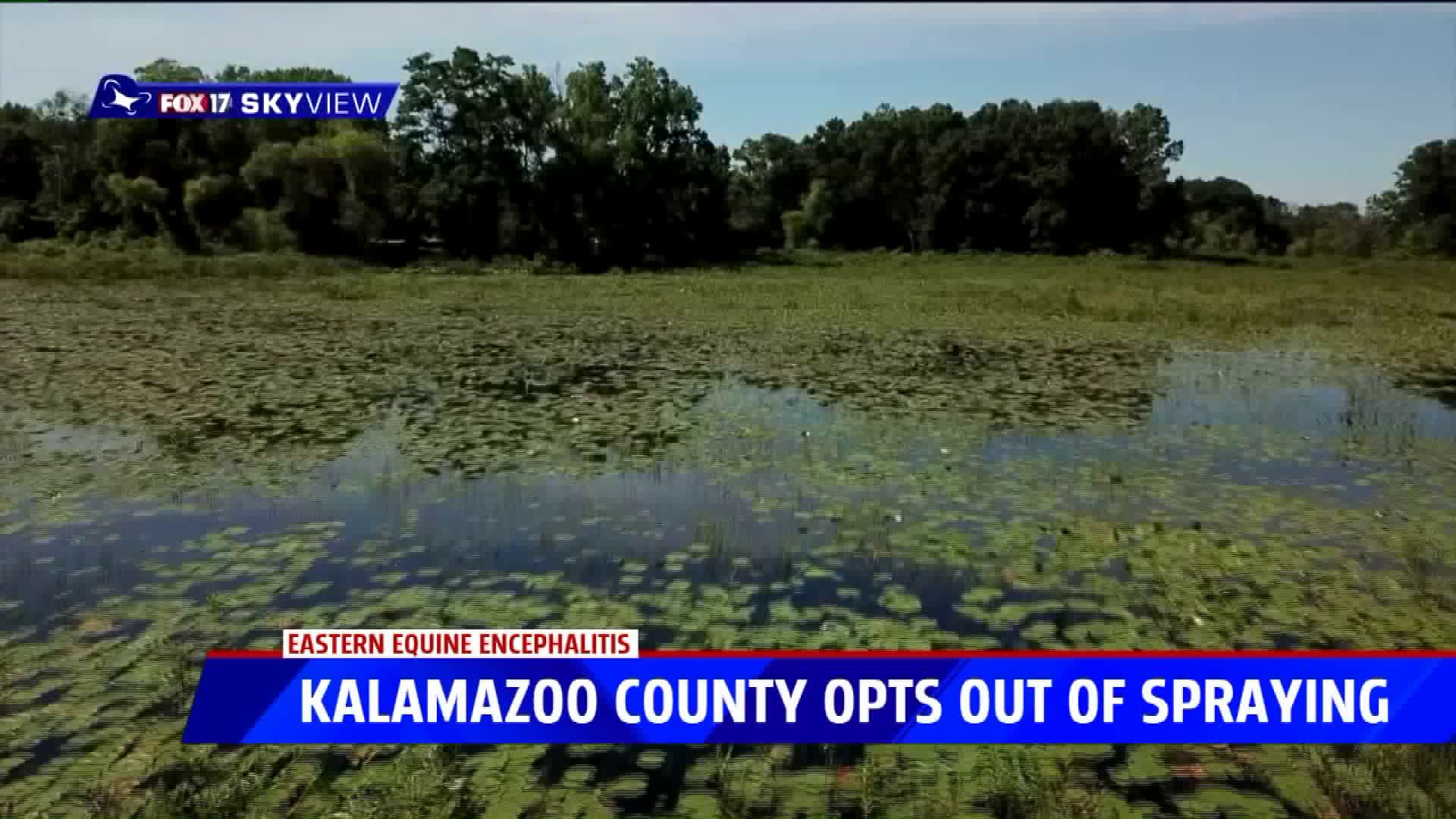 No Aerial Spraying for Kalamazoo County

PORTAGE, Mich. — The Kalamazoo County Health and Community Services stated in a press release Monday afternoon that there will be “no aerial treatment spraying of insecticide in Kalamazoo County.”

The announcement comes a day after they announced that both Kalamazoo and Portage will not be sprayed Sunday night, when health officials scheduled for the aerial spraying to occur. They said many residents in both cities opted out.

“Throwing chemicals up in the air is never good,” she said during an interview with FOX 17 at Portage City Hall. “You just can’t get a lot of public support behind that.”

Mayor Randall wasn’t behind it either because of the lack of education surrounding it, she said. She voiced her concerns Friday afternoon during a press conference at the county health building after officials announced that they would spray parts of the county to halt the spread of Eastern Equine Encephalitis, or EEE.

Mayor Randall had concerns, considering she’d only found out about the decision just hours before the press conference.

“We want to do what’s best for our citizens and we need education on that instead of in the 11th hour telling us,” Mayor Randall said. “Our elected-officials that represent Portage and Southwest Michigan didn’t even know about it until 12:01 on Friday in an email.”

During that presser, Health Officer Jim Rutherford said that so far there’s been nine human cases in six counties. Three of them were fatal. There’s also been 27 animal cases, ranging from horses to Mexican wolf pups.

He went on to say that a twin-engine plane would spray ultra-low-volume insecticides over certain areas in 13 counties and that the the spray would drift through the “air to kill adult mosquitos on contact.”

However, Mayor Randall had more questions then and now.

“There wasn’t a lot of notice going forward either. It was just a couple of days really,” she said during an interview with FOX 17 News at the Humane Society. “There was an opt-out window 48 hours prior to a spray. However when people were learning about it, that 48-hour window was already closed.”

“We did put on Facebook just a better-safe-than-sorry type of statement because pyrethrins are toxic to cats,” she said. “That is something that we already know in animal welfare.”

Mayor Randall was concerned about pets and livestock as well, she said. As relieved as she was that the spraying for the entire county was called off,  there’s still more questions that need answers she said.

“Honestly I’m going to ask the governor to convene a meeting of locally-elected and state-elected officials to answer all the questions that we have,” she said. "And get a plan going forward.”