‘Time to send a message’: Leaders ask for community help in shooting investigations 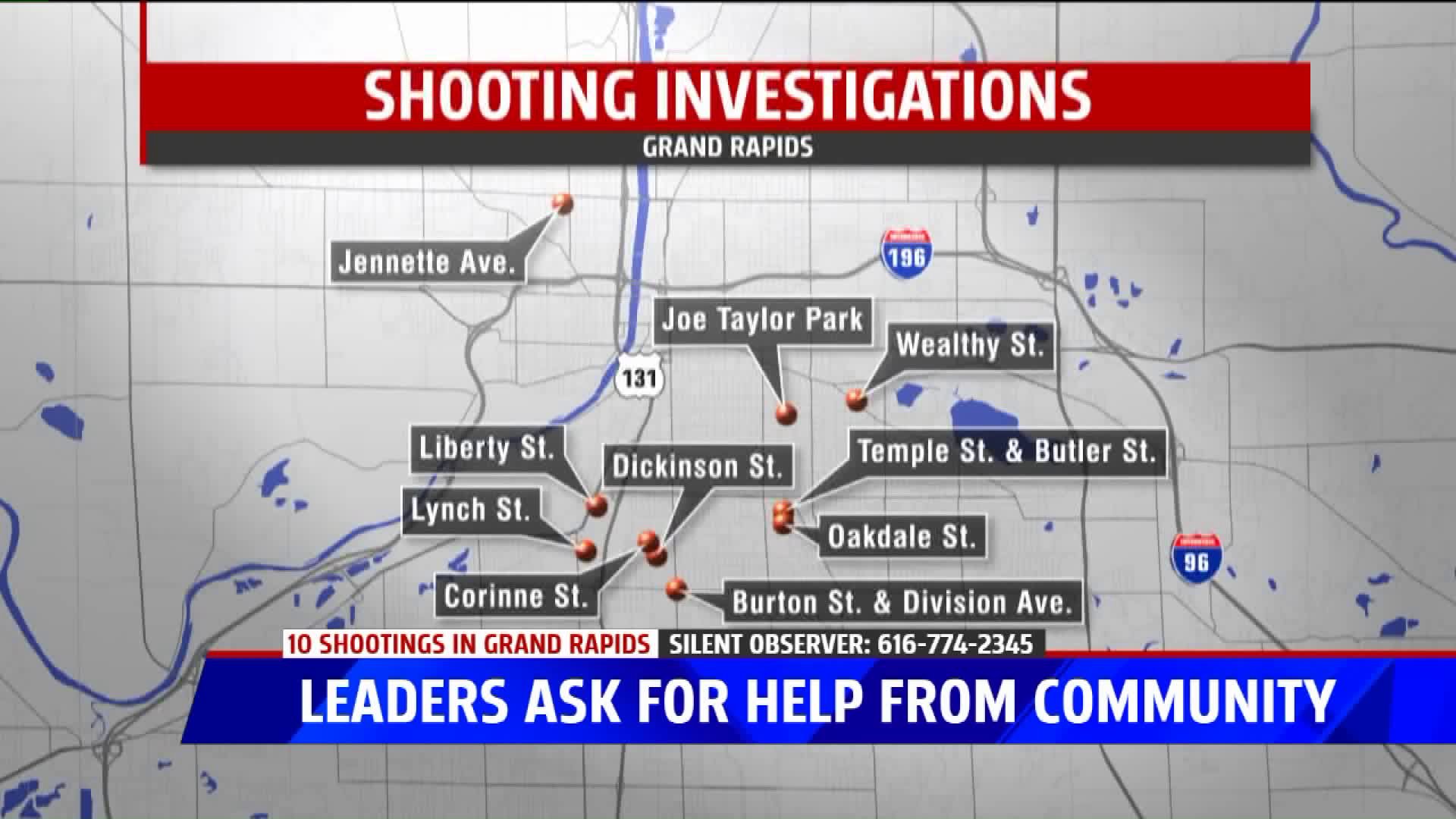 GRAND RAPIDS, Mich. — Grand Rapids police and community leaders came together at the site of the city’s latest shooting Friday to address the recent spike in gun violence.

Police have investigated 10 separate shootings since Saturday that injured six people, including a 10-year-old girl. Only one arrest has been made at this point in the investigations.

Law enforcement, city officials and community members each spoke on Friday, many asking for Grand Rapids’ residents to help end the violence.

“The code of silence is going to end up having one of your children silenced,” Kent County Commissioner Robert Womack said.

Several speakers Friday referenced the need for people to change their thought process when it comes to telling police what they know about a crime.

City Commissioner Joseph Jones asked residents to commit to the responsibility they have in keeping their neighborhoods safe.

“We need a culture shift right now: A culture that embraces the idea that if you want what’s best for your children and families, you will commit to letting the right people know who’s involved in some of the unfortunate incidents that have been place in our city,” Jones said.

City commissioner Nathaniel Moody said the community needs to stick together and get back to a place where everyone worked together to raise the children.

“From an African American standpoint, at one time in our lives, we all took care of one another,” he said. “We had parenting skills that were beyond the ramifications of some of our thinking. But now, we lost that.

“We gotta get back to training our parents to become parents, and that way it will allow their children to become young strong men and women,” Moody said.

Commissioner Senita Lenear said she has been communicating with citizens, business owners and corporations working on what to do next.

On Tuesday, Lenear and several other city and police leaders took suggestions from the public on how to curb the violence. Some suggestions included starting local youth leagues and nonprofits aimed at helping young people.

Investigators have determined that the shootings have not been at random. Police said some of the incidents have been retaliatory and others had an identifiable motive.

“This is not a case of people driving around the city shooting randomly at homes and individuals,” Kiddle said.

He also referenced partnerships the department has made with Grand Rapids Public Schools, community groups and nonprofits, and churches.

GRPS public safety officers have agreed to help monitor the city’s parks and other high visibility areas in addition to ensuring the security of the schools. Kiddle said the department is considering working with churches to bring pastors on patrols to assist with engaging with people.

However, he says the most important partnership than the one between officers and the people they are trying to protect.

“There is no greater partnership than between the police and the residents,” Kiddle said. “We are going to do everything we can to curb this violence and to ensure residents feel safe in their home, workplace and location where they play, but we cannot do it alone.”

The string of shootings started late Saturday night when a suspect shot at a house on Liberty Street after a family argument. The alleged shooter was arrested at the scene.

Just hours later, police received a report of a suspect walking into a crowd on Wealthy Street and firing two shots before running away. Investigators are still searching for the suspect.

Shortly after that incident, a 10-year-old girl was shot outside a home at the intersection of Temple and Butler streets. The girl is expected to recover, but no arrests have been made.

On Monday, an unoccupied home on Oakdale Street was shot at. There weren’t any injuries.

The first incident happened on Jennette Avenue when someone shot into a home. Nobody was injured and no suspects have been arrested.

Later, a woman was shot in the arm and leg when someone opened fire at a car on Dickinson Street.

A man was hospitalized later Tuesday morning after being shot at a home on Corrinne Street. Two male suspects ran away from the scene and still haven’t been brought into custody.

That night, two houses on the city’s southwest side were shot at on Lynch Street.

The city’s most recent shooting happened Wednesday at Joe Taylor Park, where Friday’s press conference was held. A man in his 20s was shot in the back but is expected to recover.

At this point in the investigation, none of the shootings are believed to be connected to each other.

"The neighborhoods are scared, families are scared, the children are scared, it’s just not fair and someone is really going to get hurt. It’s just a terrible shame that people are out there with guns, shooting up neighborhoods," Silent Observer Executive Director Chris Cameron said.

She thinks with more people breaking the silence,  future senseless violence could be prevented.

"There are societal problems certainly that I can’t solve, I can’t pretend to solve, but I do know that when people stand up, and they stand up against crime, and they report information about crime and arrests happen, the community is safer," Cameron added.